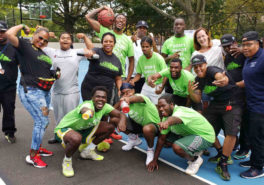 On Saturday, September 7, teams representing neighborhoods across the city, all of whom are combating gun violence year-round in their communities using the Cure Violence methodology, participated in the ‘Don’t Shoot Just Hoop’ Basketball Tournament in Brooklyn as a sign of unity against the growing gun violence crisis. One of the teams competing was BRAG (Bronx Rises Against Gun Violence) representing the Bronx and Good Shepherd Services.