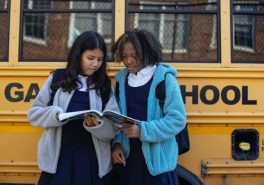 The New York City school system has almost 550 high schools; fifty-six of them are transfer high schools serving students at risk of not graduating. Leaving high school without a diploma was once more common than graduating in the U.S.; the national high school graduation rate only reached 50% in 1940. In the years after World War II, young people without a high school degree had a robust job market to drop into. But by 1970, 80% of the country’s youth had earned a high school diploma, Black and Latinx graduation rates lagged significantly behind white rates, and the formerly robust job market was fading. By 2010, the nation’s graduation rate approached 85% and Black and Latinx rates had narrowed the gap with white rates. But young people without a high school diploma faced a bleak future as technological change, economic globalization and automation shriveled the prospects for meaningful and rewarding work.

Interventions such as transfer schools for students disengaged from high school have a long history in New York City. The first such efforts were street academies and storefront operations organized by the New York City Urban League during the late 1960s. Some fifteen Urban League street academies, financed by major city banks and corporations, collaborated with the city school system to help some 2,000 out-of-school Black and Latinx youth earn their high school diplomas. Read Full Article

By Norm Fruchter and Christina Mokhtar-Ross

Metropolitan Center for Research on Equity and the Transformation of Schools